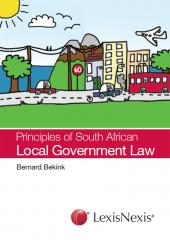 He was promoted to associate professor from 1 January 2008.

From 1993 to 1997 he was senior legal advisor for the City Council of Pretoria.

In 1997 he joined the University of Pretoria as senior lecturer in the Department of Public Law.

After completion of his LLB degree he joined Couzyn, Hertzog & Horak Attorneys as candidate attorney from 1991-1993.

View all books by Bernard Bekink (2)