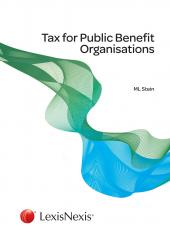 Tax for Public Benefit Organisations covers all the provisions of the Income Tax Act that deal with PBOs, most importantly those that provide the requirements for approval by SARS of a PBO as a tax€“exempt body; those that deal with the donations tax position of donations to PBOs and the law governing the deduction of donations to PBOs. The book also deals with the provisions of the Income Tax Act covering the provisional tax status of PBOs, provisions dealing with the dividends tax and PBOs, the capital gains tax concessions for PBOs, some provisions on PBOs and corporate restructuring and how the recently introduced provisions dealing with small business funding entities affect PBOs.

All the other tax Acts that deal with PBOs, have been referred to and relevant sections of the Acts have been included. The text has been fully cross-referenced to the legislation and there is also a table of sections

View all books by ML Stein (8)