A Guide to Sentencing in South Africa 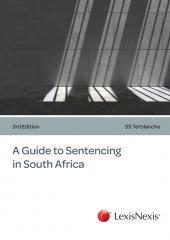 A Guide to Sentencing in South Africa is a definitive and comprehensive guide to criminal law and procedure relating to sentencing. The new edition deals with the substantial changes which have taken place since the second edition published:

The Child Justice Act 75 of 2008 has made substantial changes to the law on child justice. In addition to the new legislation, several judgments by the CC have highlighted certain legal aspects relating to children and child offenders.

There have been changes to minimum sentences, due in large part to the passing of the Criminal Law (Sentencing) Amendment Act 38 of 2007. The implications of relevant judgments by the SCA are also considered.

The correctional Services Act 111 of 1998 has been subjected to a number of amendments affecting sentencing in one way or another since 2007.

Other new or amended legislation has been included in the new edition, such as the South African Judicial Education Institute Act 14 of 2008, Prevention of and Treatment for Substance Abuse Act 70 of 2008, Prevention and Combating of Trafficking in Persons Act 7 of 2013.

The new edition also considers the development of South Africa human rights law which remains in its infancy.

View all books by S Terblanche (1)