This work is indisputably the leading textbook on patent legislation in South Africa. 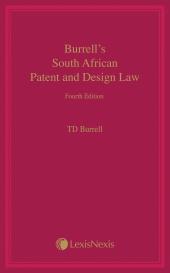 This work is indisputably the leading textbook on patent legislation in South Africa.

The publication has been indispensable to patent attorneys, agents and students. Burrell's South African Patent and Design Law provides a critical account of South African patent law and discusses the practical and legal.

View all books by TD Burrell (1)