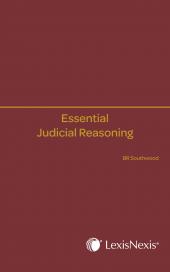 A judicial officer is, on a daily basis, required to decide on issues of practice and procedure and assess evidence.

In deciding these issues and assessing the evidence, the judicial officer is required to know the reasoning process relevant to the situation, as established by the case law.

It is a guide to difficult problems that can often arise unexpectedly in court and is essential for judicial officers, advocates and attorneys.

A reliable resource for the preparation of judgments
by Vusi Nkosi
Partner at Shepstone & Wylie and sometime Acting Judge of the High Court of South Africa
I found the book very useful, and I relied on it extensively in dealing with the cases I presided over and for the preparation of my judgments during my most recent acting stint from 1 February 2017 to 3 March 2017.

View all books by BR Southwood (1)