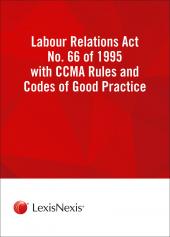 The pocketbook also contains the new CCMA Rules and new Guidelines on Misconduct Arbitrations which were effective from 1 April 2015.