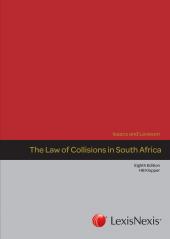 The eighth edition of Law of Collisions includes the latest case law, the impact of the Consumer Protection Act. on repairs to vehicles and quality of service, liability of state employees, new rules of Magistrates Court and criminal offences arising from collisions.

He also initiated a unique computer-based practical training for students in Law of Third Party Compensation for which he received a teaching innovation award from the University of Pretoria in 2005.

He was also appointed as a Commissioner for the Small Claims Court in which capacity he has rendered community service since 1994.

Testified before the Melamet and Satchwell Commis-sions of enquiry into the road accident compensation system and received special mention for his contribution in the report of the RAF Commission published in 2002.

He teaches the Law of Third Party Compensation (DVR 420) and Law of Competition as part of the Law of Intellectual Property (IGZ 320). He was also involved with the training of the staff of the predecessor of and the Road Accident Fund and from 1990 to 1997.

He was also employed by the Department of Constitutional development during his years of part-time university study first as prosecutor and later as acting presiding officer. He practised as an attorney, first as a professional assistant and later as a partner in a law firm, from 1973 to 1980.

He began his professional career as an attorney – working before qualifying during school and university holidays with a firm of attorneys in Bloemfontein from 1964 to 1969 and later completing his articles with the Deputy State Attorney, Bloemfontein in 1973 when he was admitted to the side bar.

View all books by Hennie Klopper (5)