This book is a comprehensive introduction to the general principles of delictual liability and the most impoprtant forms of delict. 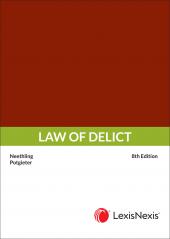 This book is a comprehensive introduction to the general principles of delictual liability and the most impoprtant forms of delict.

The eighth edition of Law of Delict is a comprehensive revision and update of Neethling-Potgieter-Visser Law of Delict (7th edition, 2015) in light of new legal authority and literature which naturally necessitated an adaptation of legal principles and theoretical points of view. In particular, special attention was given to the continuing debate on delictual principles that has taken place in academic and judicial circles since the appearance of the previous edition, especially on the relationship between wrongfulness, negligence and legal causation.

He is Professor in the Department of Private Law, and a former Dean of the Faculty of Law, at the University of South Africa, Pretoria.

In 1993 he received the Toon van den Heever-prize for legal science from the South African Academy for Science and Arts for his books on the law of delict,

View all books by Johann Neethling (3)

View all books by J Potgieter (2)

View all books by JC Knobel (1)